History Of The Lovett Memorial Library 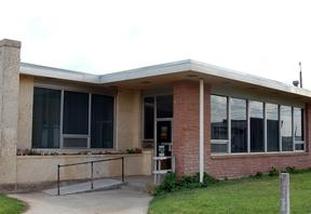 In June 1940 Miss Catherine Patterson climbed the flight of steps to make her appeal to the McLean Lions Club to start a library.  The Lions Club members agreed to offer their hall located upstairs next door to the Variety Store as a place to house a library.

The seed was planted for a city library!  Ideas where discussed with civic-minded individuals and offers of books and magazines begun to flow.  When the library was presented to the Fifth Tuesday Council of Churches the ladies voted unanimously to sponsor the project of getting a library started.  The Council of Churches provided a small sum of money for bookcases, a vertical file cabinet, and a magazine rack, which were built by donated labor according to library specifications.  Council members helped solicit and collect donated books and magazines, and with the aid of Miss Patterson, arranged these on the library shelves.

When the City of McLean voted to give $10.00 a month to help finance the new library, it automatically became the new sponsor; thus releasing the Fifth Tuesday Council of Churches.  As the steps up to the Lions Hall were not too inviting too many people, rooms were made available in the northeast corner of the City Hall for the library.  The City Council appointed the Library Board to be the governing body of the new City Library.

On August 9, 1940 a librarian, Mrs. Lady Bryant, was hired.  The library was opened from 12:00 noon until 5:00pm daily, except Sundays and legal holidays.  Books were to be loaned free of charge, with no deposit required.  Two books could be borrowed for one week at a time, and there was an overdue fine of 2 cents per day for each book.  This money was to be used to buy new books.  After necessary expenditures were made to set the library in running order in its new location, a few new books were ordered and subscriptions placed for magazines.

From 1940 until 1957 McLean, City Library continued to occupy the rooms in City Hall.  On August 30, 1957 an Open House was held in the new building at 302 M. Main.  This new home of the Library was to be called Lovett Memorial Library in honor of Henry and Fannie Lovett.

The Lovett's came into what is now Gray County before the end of the nineteenth century to establish a home.  The sod covered half-dug-out in which they lived was one of the first, if not the very first residence in this county.  They experienced the difficulties and rigors of frontier conditions.  Through thrift and toil they worked together.  They prospered and were loved as good neighbors and substantial citizens.  Because of their appreciation of Gray County, which had been so good to them, it was in their minds and hearts that the people of Gray County be blessed and benefited in the years to come.  Their fortune was left in trust for this purpose.  At a meeting attended by a group of McLean citizens and Lovett Estate Trustees, it was decided a library building was in the most useful way in which McLean could benefit from the legacy left in trust for the people of Gray County.

Once again the people of McLean began to contribute books to help fill library shelves.  Memorial books, given in honor of friends and loved ones provide a lasting tribute.  All types of books have been placed in the library in this manner.

In June of 1973, Lovett Memorial Library met the requirements to become a member of the Texas Panhandle Library System.  The response of the patrons to the new services offered by the System was gratifying.  Through Interlibrary Loan, all the resources of the public and academic libraries are available to our community.  The Reciprocal Borrowing Program encourages free access to book holdings in neighboring libraries.  The Collection Enrichment Program increases the quantity and improves the quality of printed resources within the library.  Each member of the TPLS continues to acquire materials in a pre-selected area of special interest.  Lovett Memorial Library has an in-depth collection of materials about the North American Indians.  There is also a rotating packet of large print books to be check out.

Gifts from Mrs. Alice Short Smith and the M.K. Brown Foundation provided funds to expand the L-shaped building into a large rectangular one, including a large meeting room for the community.  The expansion was a dream of Board Chairman, Boyd Meador.  Open house was held October 3, 1982.

The Harrington Library Consortium consisting of Amarillo Public Library, West Texas State University, Amarillo College and Texas Tech Health Science Center was created in 1981.  The purpose was to operate a computer-based on-line automated system to enhance the delivery of information service to the clientele served by the members and secondarily to other citizens of the Panhandle of Texas.  In 1986, the Library Board and Martha Parker, Librarian, presented a proposal to the City Council to become a member of HLC.  This enabled the McLean Library to become a part of the computer age.  The first patron to check out a book using the new system was Lush Rogers, a 90 year old Library Board member.  The community of McLean was very excited to be a member and have all the advantages of belonging to the Harrington Library Consortium.

Ann Williams became librarian in 1995 after Martha Parker retired.  In 1996 the library began to have Internet capabilities for its patrons.  Ann helped patrons learn to use the computers and internet.

Ann Williams retired in 1998.  Taking her place was Ellen Malone of Pampa.  The top 26 counties of the Panhandle, as a group, applied for a TIF grant in 1999.  The Collaborative was awarded the grant and the Lovett Library received two new computers, a laser color printer, a black and white laser printer, a digital camera and a scanner.  The grant also provided an ISDN line and connections for the library.  Bill and Melinda Gates also gave a grant that provided a computer and printer for the library with numerous programs for all ages.